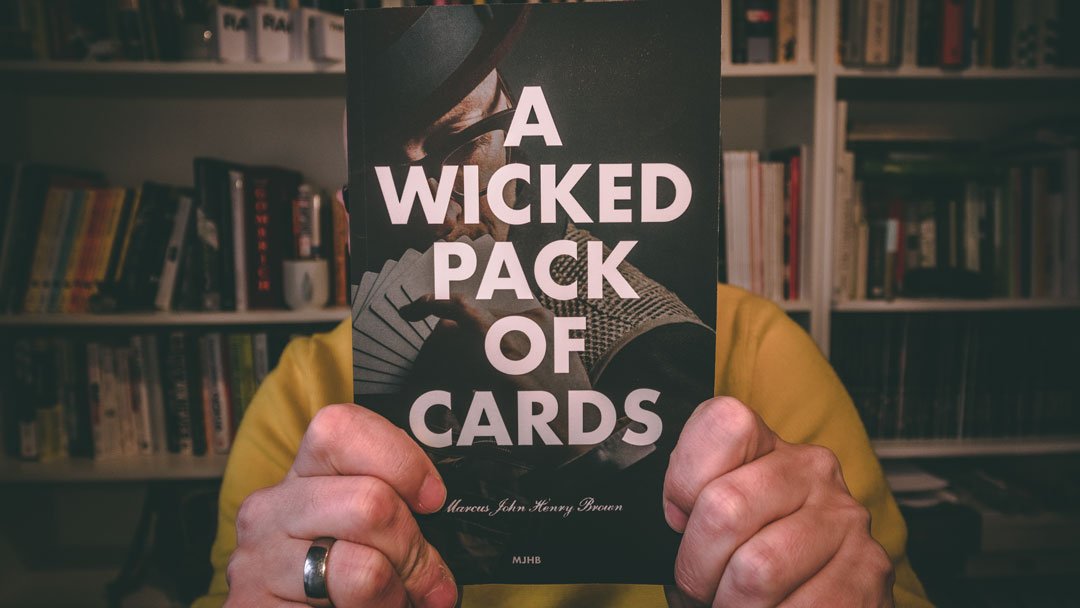 The following post was published a year ago today. I published A Wicked Pack Of Cards a year ago today. I’m not sure how I feel about that. So much has changed. The world has changed. I have changed. I’m not sure about what kind of artist I want to be anymore. Not sure if I want to stand on a stage and perform in front of people again – when or if that’s at all possible in the future. For some reason this anniversary makes me feel sad. Just thinking about what I had planned for the book, the performances, the work. None of it done. Pandemic be damned.

By the time this post is published the postal service will have delivered A Wicked Pack Of Cards: an unusual book of business spells to our flat. It’s a poem, my poem and it’s available on Amazon as of today (you can find a full list of amazon sites at the end of this post). It has actually been available since the 31st January but I’ve held back with letting you all know because I wanted to make sure that it looks and feels gorgeous. I’m a print snob. Sorry.

The Waste Land. I’m not quite sure how I ended up here, the author of a poem. I mean, I enjoy poetry but I’ve never really aspired to be a poet. I mention in the introduction to the book that The Waste Land by T.S. Elliot heavily inspired A Wicked Pack Of Cards, as did a number of other poems, old folk songs and Norse mythology. In fact, I started writing the words as if they would become my new performance and the synopsis I submitted to the re:publica programme team back in November last year clearly states that the new performance is called A Wicked Pack Of Cards as is loosely based on The Waste Land.

But it quickly became something else: the writing became something more than just a script for a performance for one person. Suddenly I had a larger cast of voices, which is something that I’ve always loved about The Waste Land: you never really know who is speaking to you and why. The voices in Elliot’s poem come in and out of focus. It’s like being stuck in Charles Ives’ “Central Park In The Dark”. I wanted to create something similar. I think I have.

My favourite character in The Waste Land is Madame Sosostris. She is the wisest woman in Europe and she has, wait for it, a wicked pack of cards. Thirty years ago I was watching a performance of The Waste Land and can remember the moment I heard her name for the first time: Madame Sosostris and her wicked pack of cards. Marvellous! Three years later I would buy a copy of the poem at Frankfurt’s main train station for 21,90 DM and read it, again and again, to try and work out what the poem and those wicked cards mean.

Over the years other equally fascinating poems have caught my eye such as The Hunting of The Snark or Sir Gawain and the Green Knight but it is The Waste Land that still fascinates me to this day. I think it has something to do with the solemn post World War One tone of the poem that grips me. It’s post-apocalyptic and looks both the past and to the future. A Wicked Pack Of Cards is a post-capitalist-apocalypse poem.

A Wicked Pack Of Cards.A Wicked Pack Of Cards is a poem with a kaleidoscope of different voices. It is a place where a keynote speaker chatters with a green knight; an old God teases a lost businessman with the prospect of a career-changing riddle; and where Europe’s most famous business magician offers salvation to all those who believe in his wicked pack of cards. It has, if you will, a cast:
The Old GodThe Two CrowsThe GeneralThe White-nosed IdiotsThe Ripper TouristsThe Business Process OutsourcerThe Three DaughtersThe Keynote SpeakerThe Green KnightThe BookkeeperThe Director of Human RessourcesThe Venture CapitalistThe StammtischThe Visitor From Another PoemThe Notorious InvestorThe One Algorithm to Rule Us AllGaryThe Old School FriendThe Business Journalist on the Business ChannelThe Morris MenApril and The Business Magician and his Wicked Pack of Cards.

Set in no particular time, A Wicked Pack Of Cards asks what might happen in a world after our version of reality ceases to exist. It mixes old stories, traditions and superstitions with the digital fantasies, Venn diagrams and strategies of the commercial world. What would happen if the great business consultants of our time discovered paganism and sorcery?
The poem is made up of thirteen-cards and a riddle. Each one is a spell – a business spell. It will take you down the dark back-alleyways of burnout, depression and imposter syndrome. Yes, A Wicked Pack of Cards is dark; but read carefully, and it will eventually deliver you into the light of optimism and the most powerful spell of all: true love.
The words and time of kind people.I printed off the first draft of the poem and thought “Blimey, I think this is a bit… good.” That’s a scary moment. I decided to send it to a couple of people to get their feedback as I wasn’t sure if I was just kidding myself. I have been moved by how generous people have been with their time, their encouragement and, in some cases, their words – some of which are included in the book. To you all, thank you!

Buying the poem.A Wicked Pack Of Cards is available on all good amazon sites:Amazon.com, Amazon.co.uk, Amazon.de, Amazon.fr, Amazon.es, Amazon.it, Amazon.jp, Amazon.ca
I’m incredibly proud of this and honestly believe that it is the best thing I ever have written and I’m very excited about the performance it will eventually become.

I very much hope you enjoy it if you do buy it.