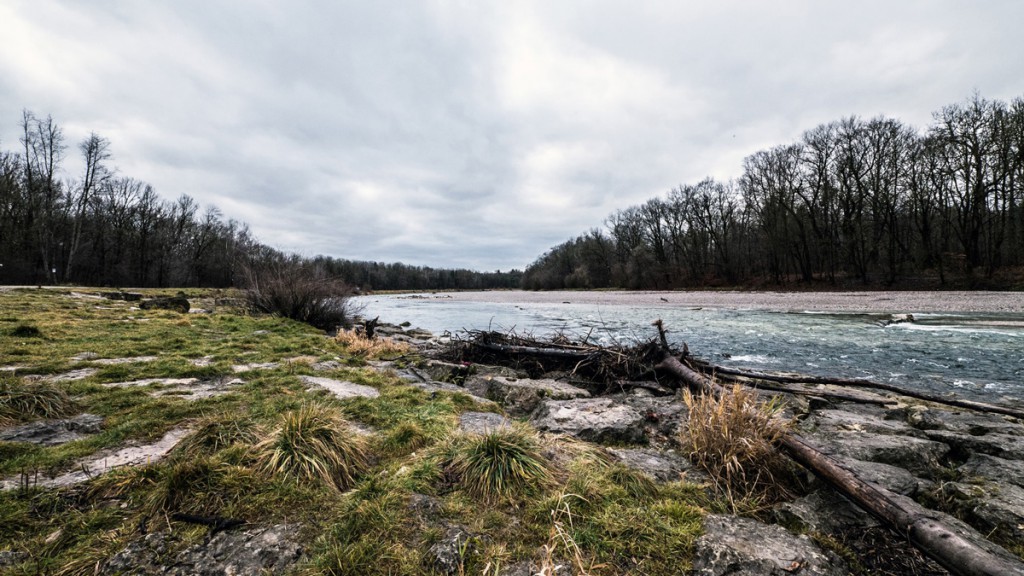 The Isar is Germany’s 4th longest river. It’s also perfect for creative walks. It starts life in the Austrian Alps eventually giving up and committing river suicide 295 km later where it joins the Danube. It carves its way through the heart of Munich and offers locals enough space to sunbathe on its stony shores. Thousands of joggers run up and down the river making complete fools of themselves in fluorescent green knickers, especially around the start of a new year.

There are a number of routes that can be used for creative walks on the Isar, all of which are good for the not-so-fit office dwellers among us. This route is the gentlest of them all: the only real physical challenge faced here is the distance which, at 24 km, is short enough to be more than achievable and yet long enough to show off to your friends and colleagues with. It’s the 1st of January, we went to bed early we’re going to walk this foggy old route, encounter the zombies of the new year, hungover dog walkers and rabid mountain bikers.

We’ll stick to the western bank of the river for the first leg of the walk, which takes us south. We’ll need about 7 km of walking to finally feel free of the city. They’re a good 7 km though, with plenty to look at: parks, beer gardens, ducks, the zoo on the opposite bank and a river that never stops looking pretty which is perfect for creative walks. Out there, somewhere in the fog, is where we’re going. Along the Isar towards Munich’s zoo.

The water is incredibly clear: deep greens, turquoise and spring crystal water swirl around stranded tree stumps that were washed downstream during the floods of the last ten years. The mess of the floods and the colours of the river.

There are lots of little walking options during the first hour or so and I like to pick and choose depending on the weather or the amount of joggers, Nordic walkers and mountain bikers that are out and about. Mountain bikers tend to be a bit grim, slightly aggressive and rarely understand the rules of not running people over, nor do they understand to the necessity of a decent mudguard to keep themselves from looking as though they’ve had a severe case of diarrhoea. I’m always looking for the quiet track, a path with less noise – a better place to think, enjoy the scenery and get we can get stuff done. The River Isar with Großhesseloher bridge in the distance

It really feels like we’ve made it out of the city by the time we’ve reached the Großhesseloher Brücke. It’s a big bridge. You cross it when you take the train down to the lakes. Reaching the bridge offers you a whole host of opportunities like giving up and catching the train home or crossing the river and walking back north. A steep climb on the western bank and you’ve found yourself a beer garden. A steep climb on the eastern bank and you find yourself in a suburb (Haarlaching) and you realise that you’re not out of the city at all. Just past the Großhesseloher bridge with the river split in two

We press on, past an Irish kiosk. I have often asked myself why this kiosk is Irish. The further south we go the fewer people we’ll see and the more peace we’ll have. The river is split into two halves: one-half is mainly used by Bavarian party rafts – huge things that carry about twenty people, a band (all your favourite Oktoberfest hits) and a lot of beer. The other half can’t be seen because of the high bank separating the two.

The party rafts are odd things. You hear them coming from quite a way off, the music echoing and bouncing off of the high cliffs, becoming some kind of strange Bavarian soundtrack: ghost like and reminiscent of what Tom Waits might do if he ever spent any time here. These little things, the music, spiky plants, spectacular weirs and abandoned buildings all offer interesting things to distract the mind with, which is helpful because it’s about now that our legs start to hurt and our stomachs call for food. Everything looks a tiny bit English on this side of the river.

At about 12 km we stop, rest and eat at the Brückenwirt. We then cross the river and make our way back up north on the eastern bank of the river. It’s striking that this side of the river is completely different: the wooded sections feel strangely English and the river is natural and looks slightly more dangerous. We’re staying down low, keeping to the river.

We have a number of walking possibilities on this side of the river, where we can climb high above the water or remain low and stick to the river bank (which I prefer). This is the quietest part of the walk and you’ll hardly see anyone (solitude is helpful for creative walks), I always have to remind myself that we’re actually walking in the city. I have had chance encounters with cowboys on horseback on this stretch of the river. Parts of the track have been closed off due to falling rocks but everyone ignores this and carries on all the same. We’ve chalked up 17 km and we’re back at the big old bridge and it is here that I always notice that there are advantages and disadvantages to round-trip walks. I like, for example, the shift of perspective, the fact that I’m physically and mentally in a different space when returning to a place I’ve visited only hours before. It can be a bit demoralising but that a mental thing and the trick is to just keep on and enjoy the walk. One thing I’ve learned about long walks is that there is no use in moaning.

Sometimes it makes sense to turn around and see how glorious your route has been.

We know that we’re nearly home when we smell the goats in the zoo but a quick look at the map reveals that we’ve got another 4 km to go, which is not a lot, but all those weak parts of my body – the chinks in my walkers armor – are starting to complain and burn but we press on, walk through the pain and actually start to enjoy each of the final steps.

It’s a lovely walk and a great route for getting things done.