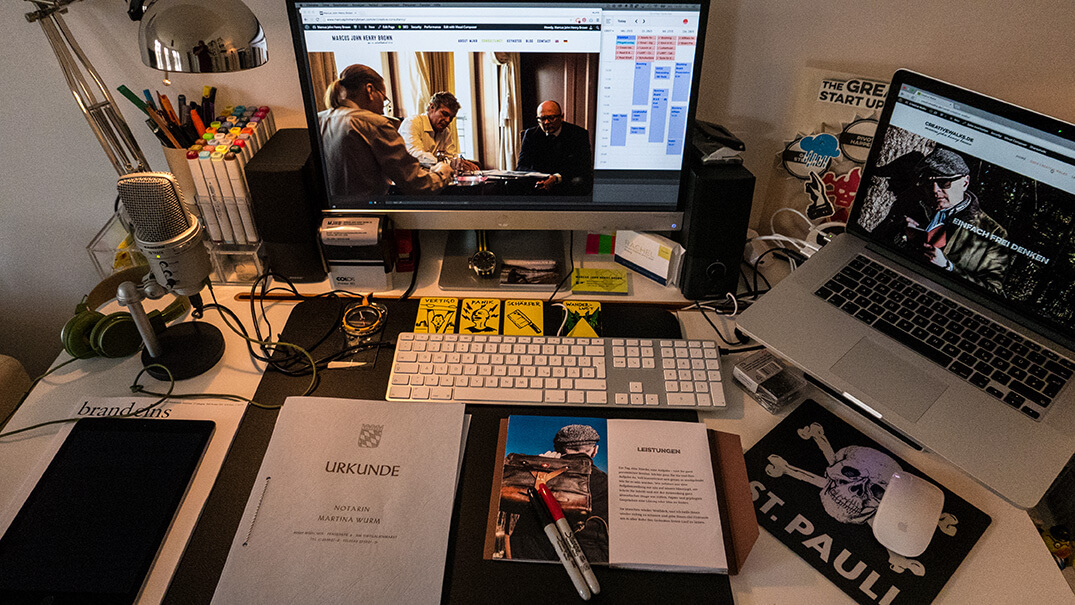 A year ago this coming Friday I signed the papers that founded my little company. I’m incredibly proud of the fact that I’m not only still going but appear to be doing rather well and I’m pleased to say that I’m honestly enjoying the experience of owning and running my own business. It’s not all been plain sailing, obviously but on the whole things have gone surprisingly well and even the things that have annoyed me have at least been interesting. I’ve learned a great deal and I’d thought I’d share some of what I’ve discovered with you all.

I’m better at this than I thought.

My wife and a very good friend encouraged me to take the step in the direction of going it alone and I heavily resisted their encouragement for quite some time. The reason being that I’d done it before a long time ago and it had gone horribly wrong. I was too young, too inexperienced and emotionally not strong enough to run my own business and employ staff. I’m older now, know a lot more and, emotionally, I’ve never been stronger. I also knew that I wouldn’t be employing staff. It has come to pass that I’m much better at the business of running a business that I had thought: I enjoy the paperwork, the accounting and the general admin of it all and I’m pretty sure that this has everything to do with the fact that it really means something to me. It’s mine and I’m closer to the money. I’m older, wiser and better at what I do and the 44-year-old me wishes that he could tell the 30-year-old version of me to chill out, stop showing off and concentrate on the craft.

One of the best decisions I’ve made over the last 12 months was getting myself a good old fashioned bookkeeper and accountant. I’m notoriously rubbish at this kind of thing and I’m forever grateful towards my good friend Dirk for sending me to mine. My bookkeeper is a small woman who is friendly and strict and I’m a little bit afraid of her. My accountant wears a leather vest and I’m a little bit afraid of him too. Having them means that I’m forced to organise all of my paperwork by the end of the month, get it to them quickly so that I can pay the inland revenue by the 10th (you’ll see a lot of Pritt Stick panic buying around the beginning of each month in Germany). I could never do this by myself and having them means that I can concentrate on the work at hand. I like paying tax.

When you set up your own business in Germany you automatically become a member of the local Chamber of Commerce or the IHK. A lot of people moan about this but I think that it is a good thing. Actually, a lot of business owners moan which is very annoying. German business people should stop moaning. I’ve been to a couple of IHK events as well as a few other start-up things and everyone seems to be fascinated by getting financed or financing someone else. Quick growth is a term that is inevitably followed by an exclamation mark. My business finances itself, something which is called “bootstrapping” apparently and although I didn’t consciously set about to build the business that way I’m rather pleased that I did (because I can now say that I’m bootstrapping). There are loads of things I want to do but the business can’t afford to do them yet so I have to wait until it can.

This is a tricky one. I was looking at how much work I have been asked to consider for June and realised that, if I took it all on, I could then employ four full-time members of staff. During my weaker moments, I have considered renting a beautiful office which is just down the street and employing people. The dream of a “proper” agency, etc. Then I sit down and do the maths. After the maths, I sit down and go through the working day when you’re responsible for the livelihoods of staff and their families. Then I realise that I don’t want to run an agency because that’s not what my business is. Then I remember that I have a strict zero staff policy and I must stick to it.

Saying “no” for the right reasons is brilliant.

When you’re sat in an agency and the 20th pitch of the year lands on your desk you just want your boss to say “no”. They always say yes. My strict zero staff policy means that I have to say no, but when I do it is always for the right reasons. Saying no helps me ensure quality, enjoyment and success for everyone involved and it reduces risk, stress and failure. The work I do take on is very fulfilling, always challenging and greatly enjoyed by all involved. I don’t bite off more than I can chew and I won’t take on work that I know I’m not good at.

My rate card is holy.

I once pointed out to the managing partners of an agency that it isn’t my problem that they, as managing partners, couldn’t charge the same daily rates as me. There will always be a discussion about money but my rate card is holy. As a good friend of mine once said – I’d rather not work at all than work on something where I feel that I’m not being valued enough. Guys, really – stick to your guns and stick to your rate cards. Value yourself and your work.

I’ve met some amazing people this last year. Honest, warm, intelligent and insanely successful. I’ve also met bloody idiots. I’ve only ever refused to work for someone once in my career and that happened early this year. One of the greatest advantages of being your own boss is that you can stand by your morals and take a stance for what you believe to be right or wrong and it is wonderfully fulfilling thing to be able to do. You get to decide what kind of people you want to have in your professional life. I have met some wonderful people since last June, people that have enriched my life and made me better at what it is I do but I have also met people who promise things and never deliver. It is really rather disappointing when it happens but you learn to move on.

The business I now run looks very different to the business I’d thought that I would be running. Things change. Some ideas are terrible. Some are really good. Some really good ideas don’t work because the time isn’t right or because people aren’t as interested in it as you thought they would be. I thought I’d be doing much more speaking, for example, but it didn’t turn out that way. That really bothered me until I realised that I had much more time to work on the speaking gigs that I was and am getting. Now I consider them to be little theatre pieces and I think that they’re much better for them. I’m insanely proud of this years re:publica talk which, despite the technical hiccups, is the best thing I’ve done on a stage. Then an idea like CreativeWalks.de will come out of the blue and be the best idea you’ve ever had. Simple, easy to understand and people seem to love it. Magical moments that demand to be enjoyed as and when they come.

Yes, I’m happy. I’m enjoying it and I’m grateful. There were a couple of months that could have gone considerably better but 2015 is going really well so far. I’m working with a personal hero. Saying no to work I know I can’t achieve on time, not having any direct reports and basically concentrating on the things I want to do means that I’m becoming better at the things I’m good at. I’m doing the best work I’ve ever done. If something doesn’t work out I don’t try and do it again I just concentrate on the things that do work and could work.

So that’s what I’ve learned about myself over the last twelve months. Many thanks to all of my customers for letting me work with you – you were all marvellous – and I’m looking forward to working with you all again in the future. Many thanks to Raimund for the photographs – (I told you they would work but we need to do some new ones now). Many thanks to all of you who just sent little messages asking if all was going well.

But above all – thank you, Bernadette.