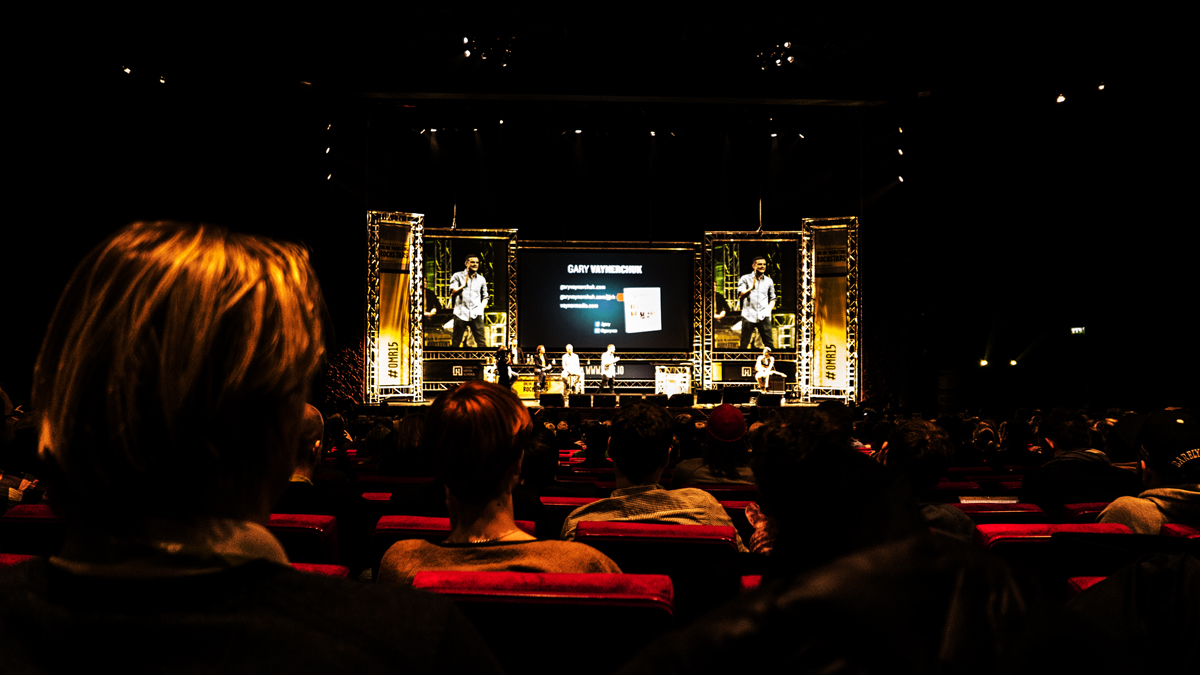 There is one very important and glaringly obvious thing that’s needs to be discussed before I knuckle down and write the rest of what I’m presuming will be a surprisingly positive post about an online marketing conference. As Peter Breuer pointed out, it is very difficult to say the name of the conference without bursting out laughing and you’d be hard pushed to find a sillier name for a conference than “Online Marketing Rockstars“. As names go it really is very, very silly and oozing with over promise. The very idea of an affiliate manager getting high on smack and throwing a television set out of their hotel room is ludicrous. They are more likely to drink one Babycham  too many and get scolded by their mothers for coming home well past midnight, tipsy and smelling like a Burger King. They certainly don’t know the chords to “Comfortably Numb”.

Online marketing conferences and events always seem to be so shiny and super efficient which, I suppose, goes with the territory of thinking of things as “thousands”, “clicks” and “conversions”. Where conferences such as re:publica tend to have the earthy aura of pale ,crafted ale (with a hint of Vegan), events such as the DMEXCO and the SMX have the aura of a Vodka-RedBull induced hangover – everything is a little too bright, hectic and makes your head hurt – they always feel like you’re in H.P. Baxxter’s head. If you combine this with a name like “Online Marketing Rockstars” you come up with what I thought to be yet another circle of business hell – so I never went.

I was wrong not to go. Online Marketing Rockstars (which from now on I will refer too as OMR because that’s not as daft) turned out to be one the best conferences I’ve ever attended and not going was before was a mistake. Here’s why I think you should go.

It’s in Hamburg, on an island and in a theatre.

Hamburg is a wonderful city (it’s nearly as good as Munich and way better than Berlin). The people are great and it has a harbour. The conference has grown to such a size that they now stage it in a Theatre which is located on an island and you need to get on a boat to get there (there is another way – but that’s NOT A BOAT). Going to a conference by boat is brilliant. The theatre is the home of “The Lion King” or something written by Elton John.

I have no idea who Philipp Westermeyer is or what he does. I have never seen anyone moderate a conference as brilliantly as he did. It was a strange mix of boyish charm, woeful unpreparedness and the feeling that he knew everyone in the room. I’m not kidding, he was astonishingly good at being the ring master: my particular highlight was when told Bejamnin Bak from Lovoo to basically “chill the fuck out” and do his presentation in German. If you happen to know him say hi from me.

If you’ve ever been to a social media conference in Germany (the German readers will know exactly which conference I’m talking about) you will understand why a conference with really good speakers that are actually talking about interesting things is so refreshing and unusual. Gary Vaynerchuck was staggeringly good, as was Thales Teixeira from Harvard and Tobias Bauckhage from Moviepilot smashed a great talk about his work in Hollywood. The interview with Evan Sharp, the founder of Pinterest, was also incredibly interesting and I think that it’s pretty safe to say that everyone in the audience (men and women) fell in love with Evan’s voice. It wasn’t all awesome but even the weaker talks (Lovoo and Facelift) would have received a recall ticket on most other conferences.

The conference was full of theatre and surprises. The lights would go out, a workman walks in and complains that there shouldn’t be people in the room – the workman turned out to be Das Bo, a German rapper. Later in the day, Deichkind turn up and create chaos, fun and noise. It may sound silly but this really made the day special – unforgettable even.

The beginning of the end of the cult of cookies.

As I mentioned above, the speakers were great. The overall theme of the day reminded me of some of the things that advertising people, specifically strategic planners, were discussing around 2006-2009 in something we amusingly called the plannersphere: attention, context, creative relevance and audiences instead of target groups. Now that might well be old hat down in Cannes (or in the dimly lit coffee shops of Shoreditch), but to hear people discuss these things at an online marketing conference was a huge surprise to me. The word “social” was used a lot, but not as a way to describe a channel but to describe a context and a way of working instead. The word “content” was frequently used but not to describe a way of marketing but to describe a unit of creative work. If I were to compare the OMR to what I saw last September at the DMEXCO I would say that there was a clear shift away from something that I call the cult of the cookie, towards creative attention and Facebook is clearly at the centre of that shift. Google was mentioned only once. YouTube wasn’t mentioned at all.  (disclaimer: I left the island to go to lunch and missed three talks so may have missed references to Google or YouTube). Facebook owned the attention of the conference (as did Instagram – which is Facebook).

This is an important shift for agencies, technology companies, publishers, media companies and traditional performance agencies a like. The fact that Dr. Peter Figge from Jung von Matt did a presentation with Nico Westermann from Facebook about their collaborative work should be a wake up call for all kinds of businesses tied to online marketing. Yes, the technology is hot but the quality, the heart of the unit of creative work isn’t hot enough. The size and significance of this shift become apparent when agencies like Jung von Matt who have a track record at smashing creative work out of the ball park work directly with Facebook. When the technological competence of companies such as Facebook, Google or Criteo* work together with the creative excellence of agencies such as Wieden+Kennedy, Jung von Matt or Thjnk then we’ll start to see stronger, more relevant work that people will find more interesting, which in turn will put PR, performance, media and social media agencies under a huge amount of pressure. It also means that we’ll see the beginning of the end of the cult of of the amateur (so stop writing books about content marketing).

So there you have it, I actually liked the OMR and if you work in the communications industry then I think you should go next year. OK, the party the night before was a tiny bit naff and I took one look at the queue to get into the after conference party and fled the scene, where I was correctly accused of being elderly by Michael Trautmann who was also fleeing for his life (and is as elderly as I am) but on the whole the OMR was bloody good. So go.

*Disclaimer: my wife works for Criteo, I know and I am very fond of a lot of people who work there.